President Trump made waves at the annual NATO conference this past summer for his criticism of European defense spending. In the ‘tweetstorm‘ that followed, Angela Merkel and the Germans emerged as the primary recipients of Trump’s ire.  While most European leaders agreed that Trump misconstrued figures related to NATO defense spending, few came to Germany’s defense as the President  waded into a conversation about Nord Stream 2, the most controversial gas pipeline project in the world. It seemed that, first once, Trump was championing a popular European sentiment – over a hot button issue most Americans were completely unaware of. This blog will examine Nord Stream 2 as a polarizing energy project with immense political, environmental and economic implications for Germany and the rest of Europe.

What is Nord Stream 2?

Nord Stream 2 is a pipeline project designed to transport natural gas from eastern Russia to northern Germany 1,200 kilometers along the bottom of the Baltic Sea. It is primarily financed by Gazprom, Russia’s state-owned energy giant, in addition to five other backers including Uniper and Wintershall of Germany, OMV of Austria, Engie of France and Royal Dutch Shell (Anglo-Dutch supermajor). Moscow-based Gazprom will provide up to 50 percent of the project’s main financing. In total, the project will cost nearly 9.5 billion Euros to complete and is already underway, as of May 2018. 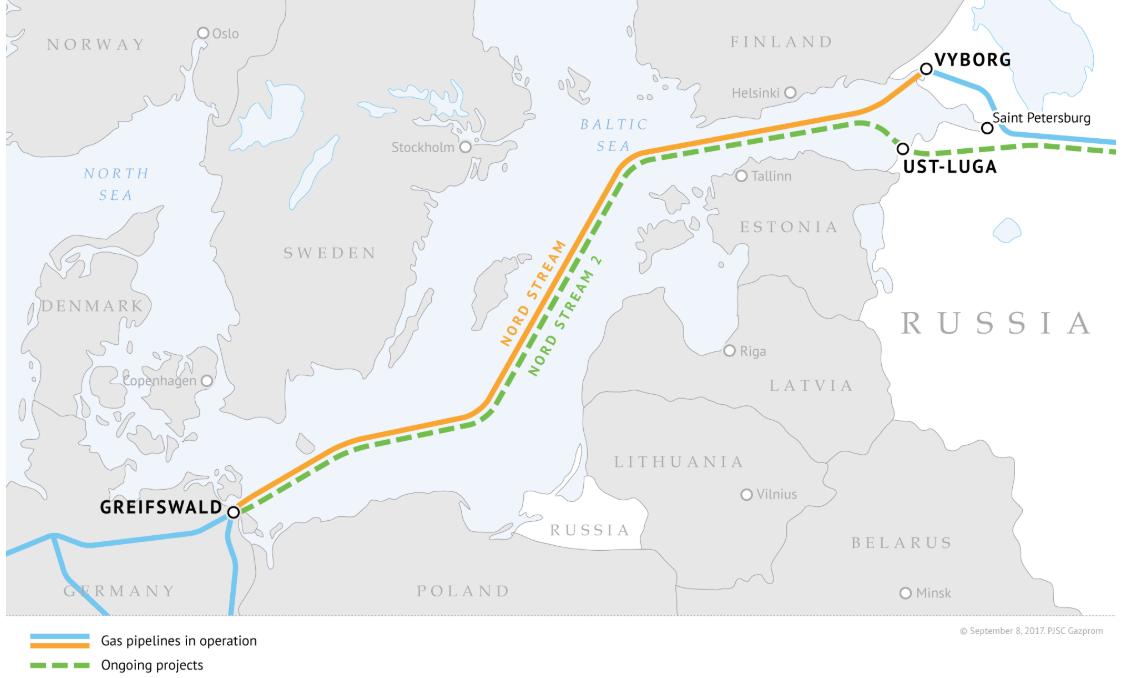 The Nord Stream 2 pipeline, as seen in the figure above, will follow the same route as the original Nord Stream pipeline, which was laid in 2012 and is currently the longest undersea pipeline on the planet. This link, from the Nord Stream 2 official website, provides additional facts and figures related to the project construction. Importantly, construction of Nord Stream 2 will supplement the annual capacity of the original pipeline, bringing the total aggregated capacity of the two lines to 110 billion cubic meters of gas per year (from 55 BCM). Germany currently sources nearly 40 percent of its natural gas from Russia, so this second Nord Stream pipeline would further cement Russia as the largest natural gas provider in Germany, as well as the rest of Europe. 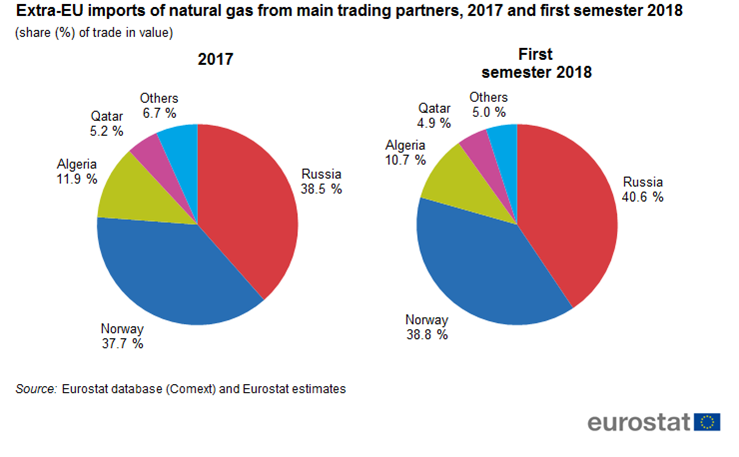 Why is it Controversial?

The opponents of Nord Stream 2 argue that the second pipeline is a political quagmire that will only increase Europe’s dependency on Russia. This opposition stems primarily from the Baltic states and former Soviet satellite nations, such as Ukraine, Poland and Estonia, who fear that Russia could cut their gas supplies in the future while minimizing damage to more lucrative markets in countries like Germany. This fear is not unfounded: in June of 2014, Russia cut gas supplies to Ukraine (acting through Gazprom) amid the fallout over the annexation of Crimea. Essentially, Russia has demonstrated that they will weaponize their gas pipelines for political gain, and there’s no reason to believe they wouldn’t do the same in the future. The Ukrainians, in particular, fear that Nord Stream 2 will divert gas supplies from Eastern Europe and ultimately eliminate the Ukrainian gas transit system that currently provides a reliable and independent flow to Europe. 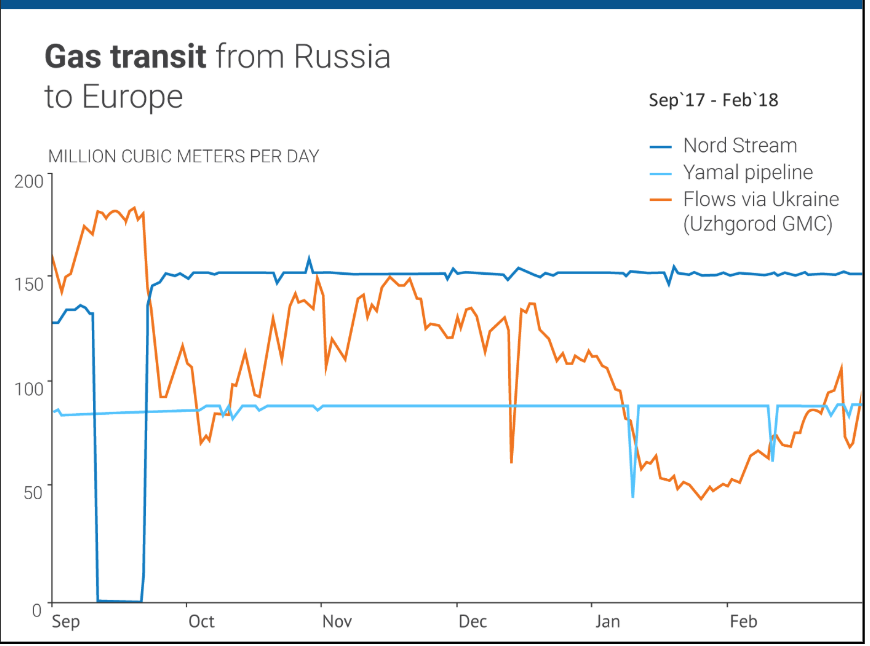 Questions also remain as to why the Germans committed to such an arrangement with the Russians in the first place. Many point to the lingering German Cold War policy of Ostpolitk, which favored economic cooperation between East and West Germany. Energy diplomacy – especially in natural gas – brokered a unique economic relationship between the two countries that exists to this day. The German historian Frank Bösh argued that “Natural gas pipelines implied mutual trust within a stable relationship, which led to further collaborations, including cooperation in nuclear power.” As a result of this past, polls show Germans are better-disposed towards Russia than almost any other national group. Nonetheless, this history fails to explain several dubious aspects of the Nord Stream agreement. For one, the original Nord Stream deal was signed in 2005 by then German Chancellor, Gerhard Schroeder. A friend of Vladimir Putin (he called Putin a “flawless democrat”) Schroeder signed the deal as he was leaving office; within weeks he was leading Nord Stream’s shareholder committee – a title he maintains to this day. In short, while the Germans maintain that Nord Stream is a mutually beneficial, economic arrangement, the man who facilitated the  deal is more or less a Russian pawn.

Finally, projections suggest that Nord Stream 2 will be an unnecessary addition to the German energy supply. As of 2016, natural gas accounted for 22.6 percent of Germany’s primary energy use, making it the country’s second most important energy source (behind mineral oil). Additionally, Germany is the world’s largest gas importer and needs to import 92 percent of the gas it consumes, with 40 percent of its supply coming from Russia. Compounding this situation, the past few years have been particularly cold in Germany, and as a result, Gazprom has reported record levels of exports to Germany. In justifying the construction of Nord Stream 2, both the German government and Gazprom cite this figure as key.

The data, however, suggests that gas imports will likely shrink throughout both Germany and Europe in the long term. Both the Nord Stream 2 website and backer Gazprom affirm on their websites that declining EU gas production must be compensated for with new imports. Yet most projections see natural gas declining in Germany from 2020 to 2050, especially if federal goals for greenhouse gas emissions, renewable energy, and energy efficiency are met. This year, the German Institute for Economic Research produced a report that showed that if either of the government’s two main climate policies were met, the demand for natural gas would drop significantly by 2050 (a decrease of 73 or 90 percent depending on the scenario).

Essentially, the rationale behind the construction of Nord Stream 2 becomes less and less clear the more one looks into it. It presents a political threat to all of Europe and seemingly contradicts Germany’s goal to become carbon-neutral by 2050. As Germany diversifies its energy supply, the need for a second pipeline from Russia is excessive, if not unnecessary. The construction of Nord Stream 2 also shows how resource scarcity can be manipulated and abused in a geopolitical context. Germany is recognized as the most powerful country in the EU, but their minimal energy resources have left them hostage to foreign suppliers like the Russians. Living in America, it’s nice to know we won’t deal with an issue like this anytime soon.